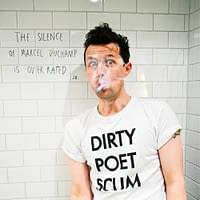 Robert is a Scottish-born, London-based poet, artist and sculptor known for his site-specific installations created from light and text, as well as his ‘fire poems’.

Montgomery works in a ‘melancholic post-Situationist’ tradition, primarily in public spaces. He is regarded as a leading figure in the conceptual art world. Some of his most famous public forms of poetry have been his white text on a black background pasted onto billboards around London as part of his belief that art and poetry should be taken out of the gallery and into the wider, everyday world be it on a billboard or a bus shelter.

‘I think there’s a certain slowness to words. I think we probably live in an age of accelerated image and we’re bombarded with hundreds of images a day and in that context words can be a moment of quiet or pause… The point of art, is to touch the hearts of strangers, without the trouble of ever having to meet them. But, if you can touch their hearts from a distance and help a little bit from your quiet studio then it’s very nice.’